Marine Park surrounds the westernmost inlet of Jamaica Bay.  The bay is one of several formed during the last 5000 years as ocean currents deposited sand in a series of long strips off the south shore of Long Island.  These strips of beach form a barrier against the surf and allow salt marshes—coastal wetlands which are flooded and drained by tides—to grow in the calm water on their protected bay side.

Gerritsen Creek, originally called Strome Kill, was a freshwater stream that once extended about twice as far inland as it does today.  Around 1920 the creek north of Avenue U was converted into an underground storm drain.  Yet it continues to supply the salt marsh with fresh water, which helps the marsh support a wide range of organisms. Broad expanses of fertile salt marsh, wildflower-adorned meadows, and rolling sand dunes dominate the landscape of Marine Park.  Myrtle warblers, grasshopper sparrows, cotton-tailed rabbits, ospreys, horseshoe crabs, and oyster toad fish are a small sampling of the animals that inhabit these plant communities and live in or around Gerritsen Creek.

The creek was probably a favorite hunting and fishing spot for Indians living in the nearby Keshawchqueren village.  Archaeological excavations in the Marine Park area have revealed arrowheads, pottery, and food preparation pits dating from 800 to 1400 A.D.  The first Europeans to settle here were the Dutch, who found the salt marshes and coastal plain of southern Brooklyn reminiscent of Holland’s landscape.  Their diet consisted of farm produce, livestock, game, and harvests of oysters and clams.  Gerritsen Creek takes its name from Dutch colonist Wolfert Gerritsen, who built a gristmill and a field house on the creek in the latter half of the 17th century.  The mill was in continuous operation until 1889, and it was destroyed by fire in 1935. The old field house was demolished by the city in 1937. According to local legend, the gristmill produced flour for both the armies of George Washington and Lord Cornwallis at different points during the Revolutionary War. 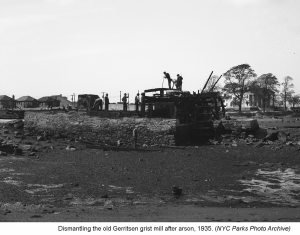 In the early 1900s developers began making elaborate plans to turn Jamaica Bay into a port, dredging Rockaway channel to allow large ships to enter the proposed harbor. Speculators anticipated a real estate boom and bought land along the Jamaica Bay waterfront. Fearing that the relatively pristine marshland around Gerritsen Creek would be destroyed, Frederick B. Pratt and Alfred T. White offered the city 150 acres in the area for use as a park in 1917. Pratt wrote in 1914 that failing to provide playground and park space in the area would “almost be a crime.” After a seven-year delay caused by politics and cost concerns the City accepted their offer. The prospect of a new park inspired developers to erect new homes in the area, although park improvements were slow to follow.

The Olympic Prize & the Creation of the Park

Plans for the park’s development evolved over time, including one by landscape architect Charles Downing Lay which won a silver medal in “Designs for Town Planning” in the 1936 Summer Olympics in Berlin, the first medal awarded to an American that summer.

Fill deposited in the marshlands in the 1930s and new land purchases increased the park’s area to 1822 acres by 1937. That year the Board of Aldermen named the site “Brooklyn Marine Park.” A series of additional land transactions, including the 1974 transfer of 1024 acres to the National Park Service for inclusion in the Gateway National Recreation Area, have stabilized the area of Marine Park at 798 acres, including land underwater.

Over the decades, portions of Marine Park have been improved with recreational facilities, while other areas have been conserved to protect wildlife and plant life. In 1939 the Pratt-White athletic field was dedicated in tribute to the two fathers of Marine Park. A 210-acre golf course opened in 1963, and the John V. Lindsay Model Airport was dedicated in 1971. New ballfields were opened in 1979 and named for baseball lover and police officer Rocco Torre in 1997. Nature trails established along Gerritsen Creek in 1984-85 invite park-goers to observe a wealth of flora and fauna. In 2000, the Salt Marsh Nature Center opened, where Urban Park Rangers present to the public a variety of nature-themed educational activities. In 2013, the Carmine Carro Community Center opened, named after Brooklyn community advocate and former Marine Park Park Warden Carmine Carro.